Why Companies Should Convert Employees Into Brand Advocates [Survey] 8 in 10 people use social media at work.

Employee downtime is bad for an organization, isn’t it? Maybe yes or no.

Yes, social media can distract people from work but it can also be an opportunity for a company to get more referral leads if the company converts its employees into brand advocates, and guides them to advocate their brand on social media.

But when the Helplama team surveyed a large number of work people throughout the US, we discovered that a significant proportion – 45% of work people don’t get any guidance from the marketing department of their company to advocate their brand on social media.

This survey will help you find out why a company needs to guide its employees to advocate their brand on social media instead of fighting with them to stop using social media at work.

From Working To Social Media Surfing

Social media seems to be a hard thing to avoid, that’s why 8 out of 10 people check their social media accounts while at work.

The largest majority – 41% of work people surf social media intermittently throughout the day. Another large proportion – 32% of people use social media during lunch break at work.

Surprisingly, a small but significant proportion – 8% of people also reported that they browse social networks during bathroom breaks.

It appears that employees spend a good amount of their work time being social.

So, should a company control social media usage on its premises? It may not work! People are accustomed to social media and they’ll use it whether you like it or not.

Then what should a company do? Take it as an opportunity to get more referral leads.

Marketing departments often spend millions on social media networks to promote posts, run campaigns, influencer programs, or ads. But most of the time, they forget to utilize the marketing channel within the organization – Employees.

Instead of fighting over social media usage, a company should guide its employees to advocate their brand on social media, encourage them to build a personal brand with company news, product updates, and other related thoughtful content.

But, the reality is – 45% of people don’t get any guidance from the marketing department of the company they work at.

This means a large proportion of companies don’t recognize the significance of employee advocacy, making it a great opportunity for your business to adopt the strategy and get more referral business.

Another reason that a company should uplift the effort of employee advocacy is that – people are more likely to see social media posts from their friends.

Furthermore, when we asked them, “Which social media post would you rather see?”, a huge proportion – 77% of the respondents said, “one from a friend.”

Not only do they choose to see posts from friends rather than from a brand, but 84% of consumers are also influenced to buy after they see social media posts by their friends, making it more vital for a company to encourage employee advocacy.

Employee advocacy can be a great strategy to put employees downtown to work. As consumers are more influenced by social posts from friends rather than by the brand, educating employees to advocate the brand can also boost the marketing efforts of the brand and can even produce better results or more leads. Brand advocacy can be as important as providing superior customer service.

So, instead of controlling social media usage, a brand or company should promote behavior that benefits the organization. Provide employees with a mix of company content and other thoughtful content that can help them represent the brand and resonate with the brand image. By doing this, the company will not only ensure satisfied employees but also better brand reach and more referral leads. 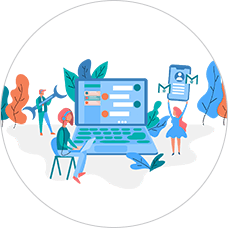